“Steven is a talented and charismatic performer who can make your event the most talked about until you have him back next year!”

Steven Blair performs a highly interactive, high energy comedy show that guarantees to make your event one that your guests will enjoy and remember for years to come.

From 5 minute to 95 minutes Stevens’ cabaret show is suitable for anywhere from a living room to a fully equipped theatre.

Often Steven performs his cabaret show as a climax to an evening that has begun with him performing as a close-up magician while your guests arrived. He presents his cabaret shows as a wedding magician, as a magician for corporate entertainment and for private parties throughout Scotland, the UK and abroad. 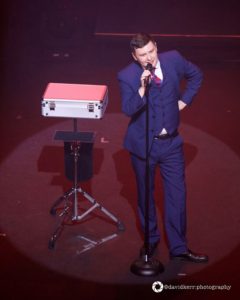 The show can even be tailored to any venue and/or to a set performance time. It is perfect for after dinner entertainment or as a standalone show and is suitable for audiences up to 3000.

Steven has recently performed as Cabaret magician for events throughout the UK and Europe, in such notable venues as 02 ABC(Glasgow), The Gaiety Theatre (Ayr), Riding rooms (Glasgow), Voodoo Rooms (Edinburgh), Wild Cabaret (Glasgow), Chamber of Secrets (Torremolinos, Spain) and sold out shows at Edinburgh Fringe Festival.

“Show was really good, I loved the Spiderman trick at the end”
Colt Cabana Professional wrestler and WWE superstar

Steven is also a very accomplished compere and MC, using magic and comedy as a link between acts or speakers. Steven is used to keep the attention of the audience and the atmosphere buzzing in the room while the stage is being cleared and the next act or speaker is getting ready.

After Dinner cabaret is a great way to make a fuss of any special guest at events weather it is someone’s birthday or a company CEO it is a great opportunity to make them a star for a few minutes during the cabaret magic show.

Why book a magician over another form of entertainment?

In comparison to music, magic can appeal to a wider variety of audience`s. While some forms of live music will appeal only to certain audiences and ages, Stevens magic can be performed for seniors, adults, professionals, teens, and even kids.

So who exactly is this Steven Blair guy?

Steven really doesn’t like to speak about himself in the third person.

Born and raised in Kilmarnock, Scotland, Steven discovered his passion for magic at a young age when he got a magic set for Christmas from his parents.  He quickly practiced and mastered the tricks in the set and started to show what he had learned to anyone who would watch. This was when Steven first discovered his passion for magic. At the age of 10, he performed for the first time in public at a talent show in Kilmarnock and won the grand prize of £5. Since then, Steven’s love for the art has only grown, quickly getting him a reputation among friends and fellow magicians as a very entertaining performer.

Steven has since developed his own unique style of performance. The magic is not about him, but it’s about the audience and creating an unforgettable magic moment for them. His goal is to ensure everyone has a great time at whatever venue he is performing in, from a family party to a big corporate event. Steven has put together many shows and can even customize a show for your event with your specification and goals in mind.

Why should you hire Steven for your next event?

Stevens cabaret magic sounds ideal for my event what should I do now?

If you’d like to enquire about having Steven perform at your event, all you have to do is click here and fill out the contact form providing as much information as you can such as location, number of people attending the event, length of performance, and any special requests. Steven will then get back to you with a quote within 24 hours.